How to up your Cyber Security strategy? “Level the playing field”, Didrik Bech CEO Elmatica

“Cyber security is our greatest weakness”, Martin Allard at the Cyber Security Day with SOFF in Stockholm this week.

Did you know that over 80% of Swedish companies has experienced a Cyber Attack in 2019 by lonely hackers, government sponsored or controlled entities. We need to level the playing field and take control of the ball, according to CEO Didrik Bech at Elmatica.

Both segments pose severe, but different challenges in respect to cyber security. Foreign actors are usually wanting to access networks to gather intelligence and build a capability so they can control and disable network, much like described in the Art of War by Sun Ztu. THE CRIMINAL.

How to differentiate?
One discussion was the differentiation between segments of attackers.

The agenda for the Cyber Security Day arranged by SOFF was certainly filled with interesting speakers and themes ranging from 5G, Cloud solutions, AI, quantum computers to civilian and public cooperation. All to ensure that the countries cyber security capability is further developed and strengthened. Over 200 people from all the major Swedish Defence and Cyber security actors, government officials and representatives from the Swedish armed forces were present. 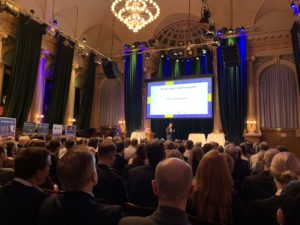 We need to create more room for cooperation
The discussion regarding who is actually responsible for cyber security, was particularly interesting as it is evident that a proper defense can only be achieved, if the cooperation between the civilian, government and defense capabilities of a country cooperate closely. If one aspect is missing then there will be no proper defense. We need to be better at sharing our experience and knowledge about cyber attacks, too much information is not shared; “Sharing is caring” in this context. Or as Martin Allard, Chief investigator for the civilian role within the Swedish total defense capability said, cyber security is our greatest weakness.

Sweden is establishing a cyber security center and waiting for the final approval from the Swedish government. The UK National Cyber Security Centre (NCSC) presented their lessons learned and explained how their center has become an integrated component of their cyber security defense capability.

The question was asked; “What is the most important task for the new cybersecurity center in Sweden?”, Robert Limmegård replied, “It is to create standards and increase knowledge about cyber security”

A threat for more than 20 years – elevating in speed
The current state and threat picture was discussed and it was pointed out that the cyber security threat is not something new, it has actually been relevant for the last 20 years. The same actors have been operating over this entire period, their knowledge and expertise has not decreased and there are now over 100 significant actors on the global scale.

Some are just stealing money, others are actively using their capabilities to steal designs so they can produce those products in their own country.

It is not as expensive or challenging to develop and conduct cyber attacks as it was in the past and one can even buy “hacking” as a service now. Even governments are using private enterprises to “gather data”, so new actors can quickly establish themselves.

So what must one do to be prepared?
Every company needs the following minimum to build their cyber security capabilities:

The greatest threat of all – is still people
As stated in Dagens Industri on 12.02.2020, mail is still the most normal way to conduct a cyber attack and we need to train people, as they represent the highest threat.
If we are not able to fulfill these minimum standards, then you will not be able to address future challenges. Said by Peter Eidegren, Försvarsmakten (Swedish Department of Defense)

Quantum Computing (The use of quantum-mechanical phenomena such as superposition and entanglement to perform computation), is hot and one of the new buzzwords. However, we learned that it IS not developed yet (expecting something within the next 30 years). It will not solve all our challenges, but it can be an interesting capability.

5G and global security politics are hot topics or as Hosuk Lee-Makiyama said “Everybody feared Japan in the 80ties and thought that Sony was going to take over the world, but sorry Spotify did”. He then explained how Japan has reformed its political institutions and that other countries who have experienced rapid growth, new capabilities and prosperity have not been able to implement the reforms and the potential consequences of this.

Lee-Makiyama continued by pointing out that one should ask oneself three question when selecting a supplier:

The challenge in the end is that we do not know how an actor, company or government will use data it has access to, so protect it as well as you can.

SAAB continued with a presentation about the cloud and that Sweden is actually ranked as the 17th best cyber security country in the world.  What do we need to consider when it comes to cyber security 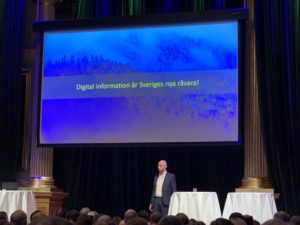 Ask yourself:
Where is the data?
What kind of data
do you have?
Do you have a strategy regarding what to share and not to share?

Until next time, lets secure our data, share our knowledge and create opportunities together – Didrik Bech CEO at Elmatica

Elmatica
Do you trust the CAM engineer?

Elmatica
“I am humble and extremely proud to present such results", says Bech.

Do you want the perfect path for PCB Fabrication?

Elmatica
How we keep our strategies and inspire the team.
What should a national defence industry be capable of?